This website is operated by H. Young (Operations) Limited. It uses cookies and other similar technologies to collect information about how it is used and what users’ preferences are. This information helps us provide users with a better browsing experience and improve how our website operates and the services available through it. For more information, see our Cookie Policy.

We may be facing a period of uncertainty with fishing off the cards for the foreseeable, but that doesn’t mean we have to stop thinking about, researching and preparing for when we’re no longer grounded. The weather seems to have picked up and undoubtedly the carp are thoroughly enjoying their sudden sense of careless freedom. A couple of us at Wychwood HQ can’t wait to get the stalking kit out the garage and feed those margin dwelling carp when the country is back in the swing of things.

Here’s a tale from Nick Helleur’s most memorable of recent years after we asked for his favourite stalking capture:

“I always struggle to choose a ‘favourite’ of anything so I’m going to reword the question to: What is your most memorable stalking capture from the last few years?

“This makes it much easier for me. Certainly the most memorable captures are usually the most rewarding from an angling perspective, and one that immediately springs to mind was a short two-hour morning trip to my local canal in early Spring a couple of years ago. What made it so enjoyable to me personally, was the method I employed to catch the carp. As a carp angler I spend the majority of my time, as do many, by fishing mainly on the bottom. Of course this means that any other style I get to use brings me great enjoyment and I relish the opportunity however it comes about.

“The spot I was targeting was a big inlet from a large sewage treatment plant that at peak times produced quite a flow of water, it pushed across the canal and wandered off beneath a wild and snaggy overgrown margin. It was here that the carp liked to sit, high up on the shelf in the cover of the cabbages, sheltered by overhanging bushes where they could often be seen rolling at first light – from experience I knew that casting a lead at them was the kiss of death, but I knew there must be a better way of tackling them.

“I decided to adopt a style that is, to be fair, alien to most carp anglers – float fishing. In this situation I’d be trotting for them, something rarely do-able on most canals, but because of the flow from the outlet it was a possibility if the flow had enough pace to it. I can remember the weather was clear and cold, high pressure with little wind, followed by freezing, frosty nights, perfect for the spot on the canal so I went to the shops and got a cheap white toasting loaf that looked just the job. I called in at the tackle shop to pick up a few loaded waggler floats as I felt I’d need the added weight to aid casting. On the drive home I kept thinking about the spot. Surely a big piece of flake drifting past those carp would be the best way to catch them I kept saying to myself.

“At home I set up a rod for the task, a Wychwood Solace Avon style rod which is 1.5lb TC. This is actually my perch rod and it was already set up with a small MAP reel loaded with 6lb line which was perfect for the job I felt. I set up the waggler between float stops so I could fish straight through to the size four hook. The depth at which I trotted the flake through the swim would be key so the hook bait didn’t snag on the weed, that and being able to cast low and hard to get the float into position upstream of the spot so that it would trot through on the right line. I was convinced the fish would be sat tight under the trailing branches so it wwas set to be a difficult cast. Too far from the overhangs and the flake would drift by unnoticed over deep water.

“I packed the minimal kit ready for an early start, I had a rod and net banded together and a bucket, not forgetting a small sling mat, nothing more. I was up well before dawn and made a flask of coffee to take with me. After de-icing the car I was soon off along misty lanes headed towards the canal. The thermometer in the car said -2 degrees, it was a chilly one for sure so I was happy of the long walk ahead of me which would ensure I arrived at the spot nice and warm.

“It was a proper winter wonderland as I made my way along the towpath, everything pure white. I arrived at the spot in darkness and sat on my bucket with a welcome hot coffee and watched the world slowly come to life. Of course as everyone wakes up the sewage plant starts to run at a higher capacity and yes you’ve guessed it, the flow increases, meaning

that my best chance of having enough pace to ‘trot’ is first thing. Because the treated water from the plant is warmer than the air temperature it steams like a bath on very cold mornings and this morning was certainly cold, I couldn’t see a thing and this meant I’d have to wait until it was light and clear enough to see, so I set up the rod and net in readiness.

"Another half hour passed with two more cups of coffee, the mist had cleared enough to see the far bank. There was a nice gap in the overhangs about twenty yards upstream of the spot where I could slot the float in, but it was clear it would require some masterful casting to get it where it needed to be on each cast.

“I pinched on a big bit of flake and made my first cast, the size and the pinch had to be just right or it wouldn’t sink quickly enough. It was a good cast I thought, so I let it run through but the line drag pulled it slowly away from the margin before it reached ‘the zone’ and it was clear I’d need to mend the line quickly to prevent this happening.

“The next cast went in inch perfect and looked to be online as it ran smoothly beneath the overhangs following me mending the line. As it reached what I thought would be the spot, the float shot under and I struck instinctively – I missed it! 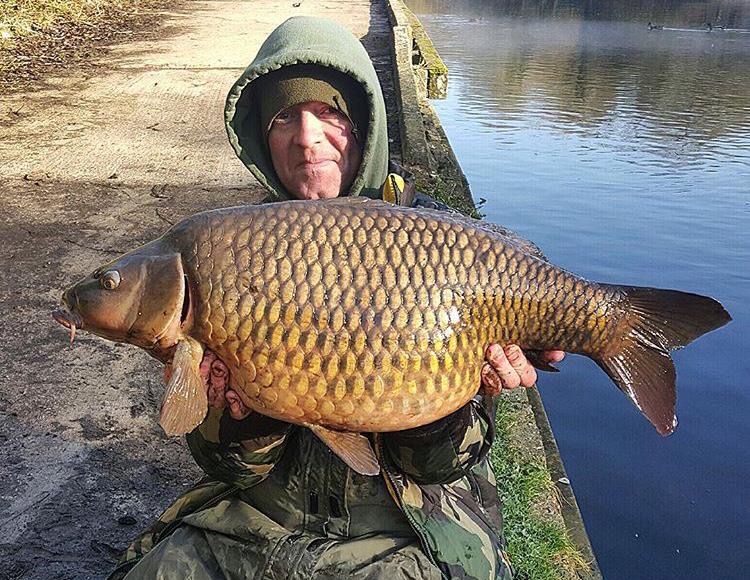 Luckily I managed to wrangle a passing dog walker to take a quick photo (I owned a potato phone at the time).

“With shaky hands I pinched on another ten pence sized bit of flake and took a few seconds to slow my breathing before I whipped out the float once more. This one went in a little too far and I had to pull the float back a little to make sure it didn’t tangle. I’m sure I caught a glimpse of the flake sinking from view, so I let it run after again mending the line. This time the float clipped one of the overhangs and held there for the briefest of seconds and then vanished from view. I struck hard and connected with a clearly very upset fish that tore off along the snaggy margin. The fish felt impossibly large on such light tackle, I could make no impression on it and had no control for the first twenty seconds or so. The middle of the canal was lit up by a big long streak of froth and fizzing as the carp charged along the silty bottom.

“Eventually it stopped and hit the surface so I slowly made my way to it with the net tucked under my arm, and 50 yards downstream I got level with it, the battle was far from over though and it was a good ten minutes with the rod bent double before a barrel of golden scales rose slowly into view. It looked a good fish and my heart was pounding after the fight. I carried my prize back to the swim and left it recovering in the net while I composed myself and sorted out the rod.

“It was then that I realised I hadn’t got a camera with me, I’d been so into it I’d completely forgotten. Luckily a passing dog walker took a picture on my phone so I have one to show you, a lovely, deep, very powerful fish to hook in such a confined area, and on such light kit, I was over the moon. At 25lb it was a good fish for the stretch and one mega test of the tackle and the method.

“As it was still early I calmed down with a coffee and then decided to have another cast, would you believe it, the next cast hit the bank and destroyed the float so I had to start again, this time with a lighter loaded waggler that I had to really whip out there. What’s more, it was harder to control and keep on line and it took several casts to get one where I wanted it. As soon as the float reached the zone it buried again in the same spot and the strike was met with a wall of resistance that headed upstream. Again the fight was protracted and it was a fair old battle but I won the day. Another 20lb carp, how’s your luck, a mirror this time. Happy with a great result I packed up the kit and headed back to the car and on to the cafe before 9am, literally the perfect short trip.

“The welcome warmth of the café, a celebratory latte and a fishermans breakfast were the icing on the cake, what a great bit of angling...”

A Spring Session to Remember

A November to Remember